I used a slight pause in my usual schedule of reading and computer-sitting to take advantage of the fact that I live in California. I spent yesterday on a wildflower-sighting expedition. After the heavy rains of last winter, this is becoming a spectacular spring for them, and I thought it about time I took something more than a desultory look.

The peak has been moving slowly northward with the sun, and this week it was reported to have reached Carrizo Plain, a place I'd long wanted to return to. Located high up in the coastal mountains some distance south of here (basically, you drive up the Salinas Valley and then turn left), in the deep countryside some 50 miles from any actual towns, Carrizo Plain is a rift valley generated by the San Andreas Fault (oh, relax: we're used to earthquake-related geology around here). It's a national monument (BLM variety, not NPS) with a small visitor center, which wasn't yet true when I was last there.

After an early lunch in Morro Bay, a small coastal town with a huge rock and lots of great seafood restaurants, I drove up into the mountains. At first I saw mostly little clusters of orange California poppies, the state flower, by the roadside; then these gave way to various yellow and blue flowers. Soon I could see that the green hills - themselves a temporary phenomenon; 9 months of the year the grass is brown - held splashes of yellow so intense as to be visible half a mile, then - as the vistas broadened - 3 or 4 miles, then even ten miles off.

In the plain itself, the wildflower carpets - mostly different species than I'd seen earlier on - were sometimes so thick as to eradicate the green. Flowers were even growing in the alkali flats. There were a fair number of people around, even on a weekday, taking photos or just looking.

When I reported to B., she was more interested in the fauna. I saw a wild turkey, lots of crows, and a couple lizards darting into the underbrush: larger, darker-colored, and more broadly built than the tiny brown fence lizards we have at home. Many visitors brought their dogs to see the flowers, including one giant black poodle the size of a Great Dane.

The plain is actually closer to the Central Valley than to the coast highways, so when I left at 4:30 I just headed east, down the precipitous slopes into the low valley, and for dinner sought out the rather good Indian restaurant that improbably sprouted up at the I-5 Buttonwillow exit some years back. From there, a straight marathon run back home.

Photos, we have a few: just of the flowers, mostly. The colors, though, were ever so much more vivid in person. 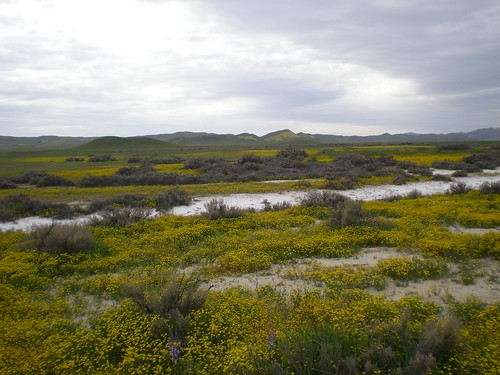 This one shows the ground carpet effect, a little of the alkali, and a distant view of yellow splashes on the hillside. 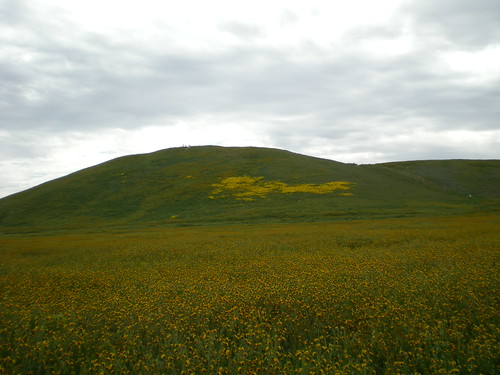 A closer view of a hillside splash. 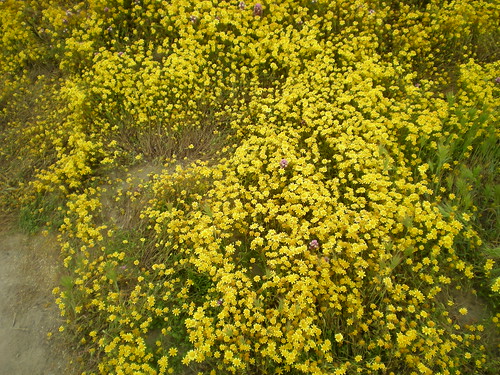 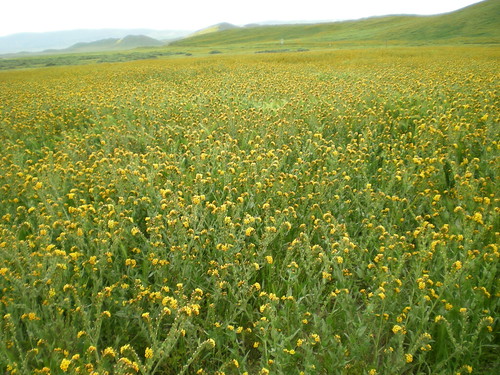 This was the most common flower on the plain. From a distance, they look yellow and black, but close up it appears that the black is an illusion. 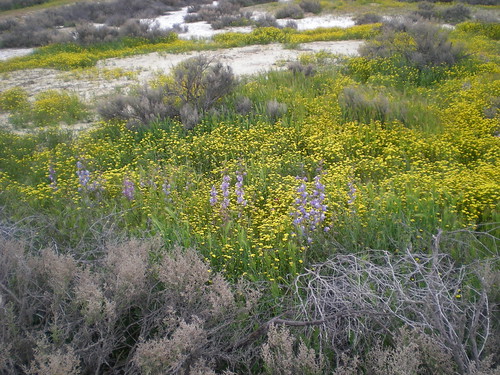 But it's not a monoculture. 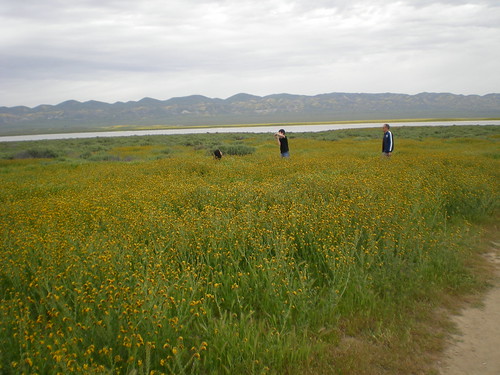 A typical human sight: people taking photos of family members sitting in the flower beds. From their ages when I saw them closer up, this seems to have been a teenage boy taking a photo of his mother, with Dad looking on. (Yes, that's an actual lake - another seasonal rarity in the desert - in the background.) 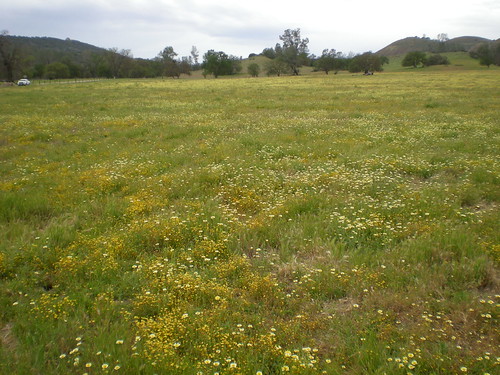 A different mix of flowers in a field some 30 miles to the west. (At Shell Creek, for anyone who cares about the geography.)
time: 7:15 AM