I came home last night from a week-long trip (going to have to write about that later, instead of now) to find that V., whom I'd known was back in the hospital, was in ICU - I'd already intended to visit today if she was capable of receiving - and the first thing I learn when I get up this morning is that she died last night. Oh no.

V's was one of my longest-standing and most vigorous friendships. At first she was an elusive will-o'-the-wisp, discernible only in apazines, whose corporeal existence was of dubious veracity. Then James L. pinned her down and introduced us in a café in the City, and from then on, her boon companionship was a regular feature. For a while, we had an active social circle of Lasfapans (whatever those might be) in the Bay Area, until it broke up in an argument over the morality of maid service, if I recall. During this period, a newfound geographical proximity allowed her and APW to act on a long-standing interest in becoming sweeties, but experience taught them that while they didn't work out as a romantic couple, they fit together just fine as housemates. I don't know how the dynamics of that operated, and I'm not sure if they did either.

A and V were among the co-founders of the Bay Area English Regency Society, and its dance-balls were for long our favorite activity. We most liked to dance the Black Nag, because we could goof off while doing it, and annoy John Hertz.

For a while, V. edited a BAERS newsletter, for which I wrote sarcastic historical articles on the monarchy and Regency politics. She was always, always late to BAERS events at sf cons, because she'd always been off making last-minute photocopies of flyers. Eventually, health issues gradually sidelined us both.

V. could argue like the dickens. I think she was wrong, but then, I would say that, wouldn't I? She had the ability to persuade me into activities where my staid self would not normally be seen, like a Jamaica-themed party, or standing guard while she changed clothes in the middle of the sidewalk, or a hunt for ice cream at 2 AM. I also twice was among a passel helping her move house at peculiar hours of the night: more memorable scenes.

She was a performance artist and a journalist. She introduced me to the music of the Bobs. This was so long ago that they were still good. Sometimes we attended their concerts together.

More recently, when her health and schedule permitted, she was among those who accompanied me to classical concerts I review. She was studying harmony at a community college, and worked hard at it. Our last in-person conversation was a long late-evening chat over ice cream (that again!) at Tresidder after a concert at Dinkelspiel a few months ago. Among much else, she gave me a full account of the parlous state of her health, and confessed that it was the free public health services in San Mateo County that were keeping her alive. In another county, she would have died long since. I hope the people who oppose the likes of Obamacare are bitterly disappointed that she lasted as long as she did.

What especially bothers me is that she was 58. Not just that that's young: it's a fatal age. Arthur Sullivan, Charles Williams, Roger Zelazny, James Joyce, Andy Warhol, Richard Burton, George Harrison, so many greats gone at 58.

Here is V. when she was young: 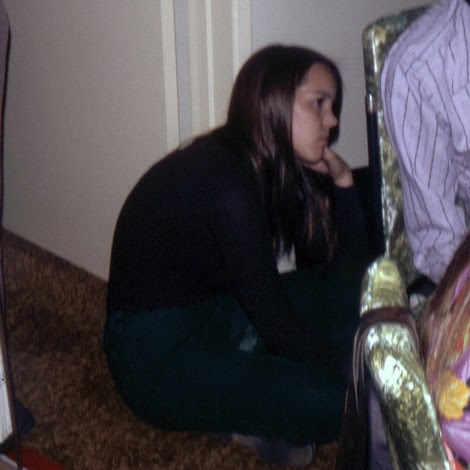