So I was away for nearly a week, just before Thanksgiving. Did you notice I was gone? I drove my trusty small blue thing to LA for an errand with assorted objects. One of those objects was to visit friends who are mother & daughter, and here to prove it am I in my position to cheer on daughter who has just run 5K in 35 minutes, which was enough to put her, at age 10, 18th of 87 in the 12-and-under age group in the local municipal race in the rain and drizzle on Saturday morning. (Mom, who took this picture, also came in 18th in her age group, but we will draw a discreet veil over exactly what that age group was.) 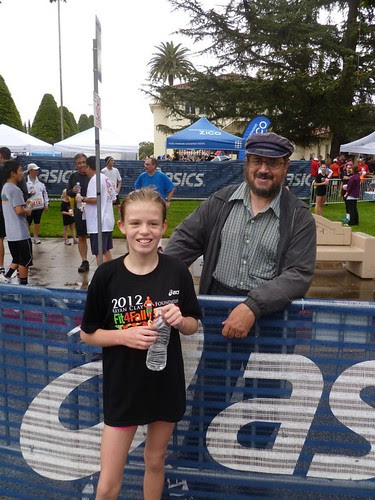 Much else we did together. Having, with regrets, missed the recital program that daughter's dance academy put on in June, at least I got to see the videorecording. Much variety of numbers, ranging from quasi-ballet to something of a cross between jazz dancing and break dancing, and of ages from 3-year-olds toddling around the stage up to the maturity of 18. Daughter's best number came when she and a line of other pre-teens in sailor costumes tap-danced to a recording of "Anything Goes", a song which, I gathered, the instructors told the girls nothing about.

While there, I got to visit a fledgling Inklings collection at the college library. And I got to hear an impressively good 8-voice caroling group at the town's downtown festive evening holiday walk. And I played with the family dog. Most of you won't believe I did this. The dog's name is Queen Lucy of Narnia; she is utterly black in fur and appears to be a toy poodle or something of that nature, insofar as it's possible to make the breed out through the blackness. Queen Lucy has one interest in life, a hollow-matrix rubber ball. She picks it up and trots over to you, puts the ball down, and nudges it with her snout in your direction. And then you had better either pick it up and throw it, or kick it, so that she can chase it and bring it back again, or you will get barked at. This goes on all day. Queen Lucy would sometimes pre-emptively run where the ball had gone last time; I would then invariably throw it in the other direction. This made no difference to the dog, who would change gears and run the other way.

Also seen and chatted with much on this visit, Lynn Maudlin who came over for takeout Chinese; Sherwood Smith, for whom I played CDs of two of the Three Greatest 20th Century Symphonists You've Never Heard Of, and a musical post with genuine sound files is coming soon, I promise; and Sarah Beach, with whom I talked Tolkien over Olvera Street Mexican food. And others, leading to the spookiest event of the trip, a midnight ceremony in a rambling house at the highest tip of the foothills at which we turned out the lights, lit numerous candles, and paid respect to the departed to the strains of a recording of Purcell's Ode on the Death of Queen Mary.

And a few other odd errands. Having failed to secure a phone number that wasn't to a sales bank incapable of addressing my problem, I visited in person the headquarters of a certain satellite TV company, threw down on the front desk a huge pile of junk mail (not bills) that they'd been sending over the last five years to someone who does not live at my house, and demanded that they do something to remove this name from their mailing list, an ultimatum they accepted with courtesy. On the way home I stopped, as I've done before, at Galco's, the soda-pop shop in Highland Park, to pick up a caseload of miscellaneous brands of obscure root beers, ginger beers, spruce beers, and other odd drinks that nobody else carries in such profusion; also four bottles of different brands of diet cream soda as a "honey, I'm home" present for my B.

And one more big errand, to the Eaton Collection, the big sf collection at UC Riverside, to donate to their fanzine holdings (or, if they're duplicates, to other libraries in their consortium that collect fanzines) six boxes of old fanzines, mostly apas, from my garage. This included the entire back stock of C/RAPA-pi from my OEship, a duplicate set of Lasfapa from its glory days that fell into my hands under peculiar circumstances, and most of my personal copies of FAPA, an apa that is more nuisance to store and organize than it is desirable to keep. True, I might have dropped them off at some Corflu's freebie table, but having concluded a few months ago that neither that, nor any other significant fanac, is liable to be in my future, I decided that this was a better home.

Riverside was my first stop, and I was due there at 3 pm on Thursday. Having gotten as far as San Luis Obispo by Wednesday night, I saw no reason to struggle through the LA freeways. Instead, I went around the north side of the mountains sheltering the LA basin. A series of back state highways and unnumbered mountain roads, fortunately all of which were paved, makes (with some adjustment for terrain) a beeline from Santa Maria to the Cajon Pass above San Bernardino and Riverside, running along the edge of the mountains, most of which is marked by the San Andreas Fault (thus the beeline), first along the ridgeline over the gaping canyons opening onto the San Joaquin Valley far below, then, after you cross I-5 at the top of the Tejon Pass, along the edge of the high desert (of Edwards AFB and the "Restless" episode of Buffy fame). It was gorgeous scenery, mostly on roads I'd never taken before, and despite the meanderings of the route it got me there, after a 9 am start, and with a break for lunch at Gorman (the logical stop), right on time.