The title above is only valid for certain values of "you," of course, but I expect that few of these composers will be known to the casual classical listener. By "greatest," I mean they wrote works which move me as the canonically great 19th century symphonies do: with fluid and subtle construction, strong and varied emotions, and memorable melodic material imaginatively presented and developed. For me, a great work of music has to click in my brain: after only a few listenings (and I want many of them) I find I've essentially memorized it: at all times while listening to it, I know what's about to happen next, and that something makes sense in context. At the same time, these works are modern: they have the sound of their time, and are unmistakable for earlier work. Jean Sibelius, Carl Nielsen, Serge Prokofiev, Dmitri Shostakovich, and Ralph Vaughan Williams are great 20th century symphonists by my standards, and these names belong in their company. (Note: most of the links that follow are directly to YouTube audio files.) 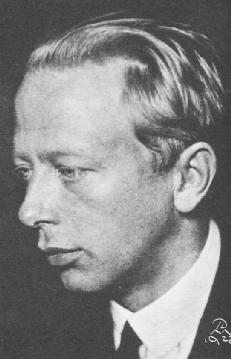 Kurt Atterberg was one of an extended generation of great modern Swedish composers, the biggest flowering Scandinavia has ever had and a major contribution to European music. Unlike his near-contemporaries Hugo Alfvén and Dag Wirén, he never wrote a (once-)famous pops classic, but he was a better symphonist than either.

Like many of the greats, Atterberg composed nine symphonies. He hit his stride with his Third of 1916 and maintained his quality through the Sixth of 1928. After that he took a 15-year break from symphonies, and his style had changed when he returned: still good, but thinner. (The best of his later works is the folk-influenced Eighth.)

His masterpiece is the Symphony No. 6 in C Major, Op. 31 (1928). I'd already acquired his brief and charming Fourth by happenstance, but the Sixth is the piece that sold me on him. I'd sought it out from curiosity over an event in regard to its origin: Atterberg completed it to submit to a competition sponsored by an American record company for symphonies in the spirit of Schubert in honor of the centenary of his death. And it won the grand prize - beating out, among others, the now better-known "Gothic" Symphony by Havergal Brian (one of the few symphonies with its own promotional video) and Franz Schmidt's Third. Because of the prize, it's sometimes known as the "Dollar" Symphony. Atterberg, whose day job was as a Swedish patent official, bought a car with the money, and there exists a recording of the symphony with a picture of Atterberg with the car on the cover. (It's an excellent performance, by the way.)

Listen to the symphony here:
The first movement is a tensely dramatic sonata structure, beginning with a yearning horn theme, followed by a brisk transition (0:51), a lyrical second theme in strings (1:33), and a folkish closing theme in winds (2:05). The development quickly follows (2:40); its climax comes with a sequential march episode (4:50) that for me is the most exciting moment in Atterberg. This brings us back to the recapitulation (5:44), where the lyric theme is rewritten and extended for cellos (6:58).

The slow movement (9:59) is a stunningly beautiful landscape portrait with a haunting theme for clarinet (10:43), later reaching a stirring climax on horn and trumpet (19:20). This is the piece I listened to, over and over, on my music player when I woke up at 4 a.m. and stood alone on the quiet deck of the small ship that was cruising us through Alaska waters a decade ago, looking out through the faint June-night sunlight at the misty islands and glaciers. If you're as moved by this music as I am, by all means listen to its composer's intensely atmospheric Third Symphony also.

If the Sixth has a flaw, it's that the third movement, the finale (22:23), is disconcertingly bouncy and lightweight after its sober predecessors. On its own terms, though, it's delightful, full of comically-presented counterpoint and polytonality, and with a surprise at the ending that I won't spoil. This movement was the only part written with foreknowledge of the competition, and the jaundiced or at least amused composer called it "a sort of satire."

You won't find this flaw in our next two composers, whose chosen symphonies actually bear their heaviest weight in the finales. Not tomorrow, but over the next week, I'll have those for your listening.
time: 7:23 AM