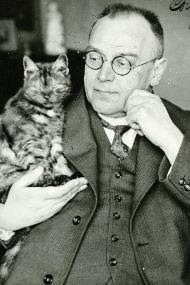 Cornelis Dopper was Dutch. Dutch? Dutch master painters are a by-word, and there's a good number of famous Dutch musical performers, but for some reason internationally famous Dutch composers are absent on that level. If you go to the Concertgebouw, Amsterdam's justifiably renowned concert hall, you will see, along the balustrade running in front of the balcony around the hall, the names of composers inscribed in, if I recall correctly, gold leaf. Most of these names are very famous. A few you will never have heard of. Those are mostly Dutch.

So Cornelis Dopper begins with one strike against him already. Nobody in search of great historical composers is liable to be poking around in the Netherlands. Another is that he was a conservative composer in a radical age, the turn of the 20th century. There's a story, evidently true, from a concert with one of his symphonies. Matthijs Vermeulen, a critic later to be known as a strongly modernist composer,1 found Dopper's work far too jolly, upbeat, and stiffly tonal for him, and the use of brass reminded him of a marching band, not to his pleasure. So, at the end of the piece, before the applause could start, he called out, intending irony, "Long live Sousa!"

Unfortunately, many of the audience thought he said, "Long live Troelstra!" Troelstra was a Dutch socialist politician who had recently sparked off a failed revolutionary coup.

A small riot broke out, and Dopper's music picked up a bad smell from the incident. Most unfair.

Dopper was the assistant conductor of the Royal Concertgebouw Orchestra. Many people didn't think he was a very good conductor, either. Willem Mengelberg, the renowned principal conductor, liked Dopper's works and performed them, but hardly anybody else did, and after they both died Dopper faded into obscurity. I haven't even been able to get a reliable list of when all of Dopper's symphonies were written: all the standard music encyclopedias differ. There are a couple books about Dopper, but they're in Dutch and no available U.S. libraries have them.

Fortunately there are a few recordings. That's how I first came to know of him: I got a CD of old Mengelberg cuts because I wanted to hear Mengelberg's conducting. It had a tone poem by Dopper on it. I investigated further. I struck gold with his last two symphonies.

Dopper wrote seven symphonies between the 1890s and 1917. Of the five I've heard, all make good listening, but pretty much each one is better than its predecessor.

It follows, then, that the finest of the set is the Symphony No. 7 "Zuiderzee" (1917), the one Vermeulen hated so much, and you can listen to it here:It's called the "Zuiderzee" because it's intended to honor the 17th century war against Spain, much of which was fought on that inland sea. Dopper uses, as principal themes, about half a dozen different Dutch folk and patriotic songs of the period. His original audience would have easily recognized them; contemporary Americans will not. But they give a dignified and hymn-like air (Dopper was always good at writing in a proud hymnal manner) to the symphony.

It's in four movements. The first, Allegro animato, introduces several of these themes in short order before plunging into a protracted development (3:25). The second movement is a tiny folk-dance Humoreske (12:22) in place of a scherzo. The slow movement (Andante rubato) (16:26) has a salt-air feel to those sudden brass chords and its second theme (19:00), doesn't it? The Finale is the wildest movement. It begins (26:25) with a fugue in the strings, whose theme re-starts several times in the first half of the movement, one time for a most unusual instrumentation (29:05) - unusual, that is, for anyone but Dopper, who uses this same trick in other works. Eventually (starting at 31:39) one of the 17C themes from the first movement (the one from 2:35)2 gradually starts to take over as the tempo and energy crank up by increments, and it finishes the movement blasted out hymn-like by the brass, in counterpoint with a chattering theme derived from the earlier fugue. Sousa lives indeed! Sousa should be so exciting.

Now, once you've heard that, take a step back to the Symphony No. 6 "Amsterdam". It's just as delightful, as bright, shiny, and quirky as the Seventh, and it also uses Dutch songs in the finale. If you don't have time for the whole symphony, at least click the time slider to 17:11 and listen to the scherzo, because it is just the best scherzo ever written.

And, hey, the scherzo from his Symphony No. 2 "Scottish" is really good also (starts at 14:15). It features a medieval-style shawm dance tune with a snap (15:29) that makes it sound vaguely Scots and is responsible for the symphony's nickname.

Dopper's symphonies are not as deep or subtly constructed as Atterberg's - most conspicuously, he's not very interested in harmonic development - and I won't argue with anyone who calls him rather superficial. But I find his music thoroughly delightful and, of equal importance, highly distinctive. Nobody else sounds quite like him, and I can recognize his style immediately - and those, for me, are essential criteria for greatness.

1. If you insist on being curious about Vermeulen, here's what he was writing at about the same time. Don't say I didn't warn you.
2. It's called O Nederland! let op u saeck ("O Netherlands, attend to your affairs") and you can hear a straight rendering on piano here.
time: 7:38 AM