Tuesday's was the only concert of the Music@Menlo festival I'm attending this week, so it gets a separate review. This concert was titled "Admiration," and admiration of who? Haydn, this year's theme composer.

The first half was a solid, hearty program of quartets in C Major by Haydn and Mozart: Haydn's Op. 33 No. 3 "The Bird" named for various chirping figures, was one of the then-recent quartets that inspired Mozart to write his set of six that he dedicated to Haydn, of which we heard K. 465 "The Dissonant" named for the extremely hairy slow introduction which is totally uncharacteristic of the rest of the quartet.

Played in a crisply articulated manner, with vigor and dramatic intensity, by the Orion String Quartet, what they mostly showed to me was how distinct and different Haydn and Mozart were as composers within the borders of the Classical style. To say that Haydn is wittier and more pointed and Mozart is more lyrical and graceful would oversimplify greatly, but it gets you somewhere along the mark.

That Haydn and Mozart each admired the other's genius at composition is historically known (for Haydn to have picked the young Mozart as the greatest composer of their day showed great perspicacity on his part), that Mozart learned technique from Haydn and that, later on, Haydn picked up some from Mozart, is also deducible. But what we learned here is how each had a distinctive and detectable individual style, which isn't always realized. 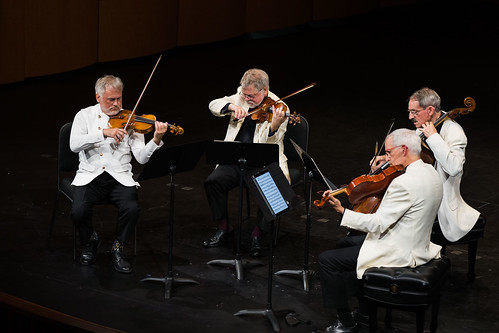 The rest of the program was early 20C French. On the 1909 centenary of Haydn's death, a French music magazine put Haydn's name to musical notes (musical notes already have letters from A to G, to H if you're German; for the rest you have to either ignore them or fake it) and commissioned six noted French composers to write brief piano pieces utilizing this motif and commemorating the occasion.

We heard four of them here, played by Hyeyeon Park, a regular Menlo pianist who doesn't often get the spotlight, more usually taking a self-effacing role as the pianist somewhere in the background of a large ensemble.

The four composers we heard are all names that should be familiar to students of French music of the period: Reynaldo Hahn (who took the theme most seriously, writing an elaborate series of variations), Paul Dukas (whose lush impressionistic arrangement is not what you'd expect from the composer of The Sorcerer's Apprentice, not so surprising if you remember La Péri), Vincent d'Indy (who wrote a minuet), and Charles-Marie Widor (who wrote a fugue).

Omitted from the program were by far the two best-known composers of the bunch, Claude Debussy and Maurice Ravel. Their Haydn pieces will be heard in a concert next Sunday when I'm not here. In their place, we got one full-length work by each composer, with no connection to Haydn, but offering something substantive instead.

For Debussy, senior Menlo violinist Arnaud Sussmann and first-time pianist Mika Sasaki played his Violin Sonata, with Sussmann packing a crisp declarative style rather similar to the way the Orions played Haydn and Mozart. It took the swamp out of Debussy, though Sasaki carefully put a little bit back in. 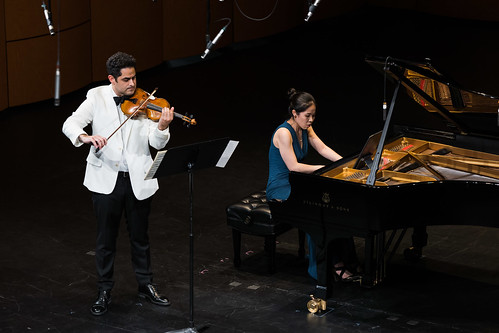 Exhibit B: Sussmann and Sasaki in Debussy

For Ravel, the four-hand version of La Valse, with Park on the treble and Michael Brown on the bass, where he mostly emitted rumbles but occasionally shot his arm over past Park to emit a mighty descending glissando across the entire keyboard. In its orchestral form this is quite a hothouse piece, and Ravel packed as much of that as possible into this hardly-reduced version. It was a bit more lurid than Menlo usually gets. 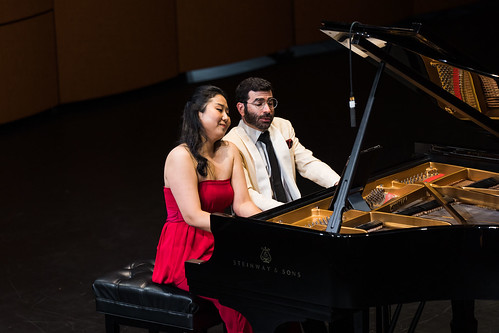 Exhibit C, Park and Brown stomping all over Ravel

I also got to the Prelude concert by the young professionals that preceded this event. First, Kodály's Serenade for two violins and a viola, avoiding the eerie lightness of Beethoven's similar piece that I heard last week by placing the viola line determinedly low, even when carrying the theme with the violins playing a descant accompaniment, and by being based on gritty Hungarian folk music which got quite the emphasis here. 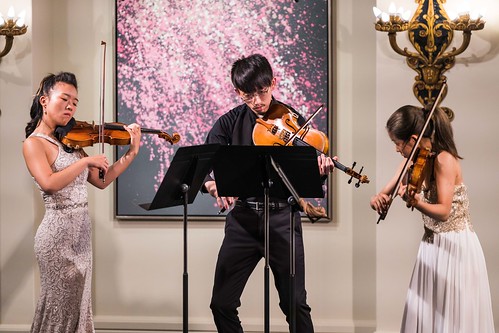 I hope that cellist Joshua Halpern has gotten over his self-confessed aversion to Shostakovich as a bitter and complaining composer after playing the solo part in his Cello Sonata. This piece is built on the same model as his Fifth Symphony which followed after a couple of very eventful years, except that the finale is jaunty instead of pompous. Halpern and pianist Sam Hong showed off the tremendous wave of dynamic emotions that the composer could produce even with only two performers to work with. 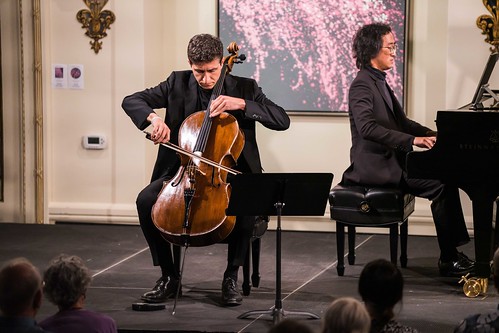 A good evening. I'll be back for a little more next week.

Photos courtesy of Music@Menlo
time: 4:11 AM